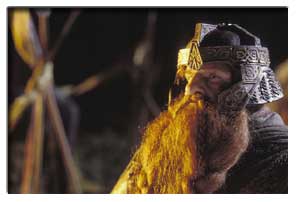 The actor who plays dwarf Gimli in the The Lord of the Rings films is suing producers of the mini series "La Femme Musketeer" for negligence after he suffered serious injuries in an on-set accident.

While filming in Croatia last November, John Rhys-Davies was injured when a wood and tile stage wall fell on top of him, according to the Superior Court suit.

The actor names as defendants Hallmark Entertainment Distribution, director Steve Boyum, producer Fred Weintraub, executive producer Larry Levinson and others. He contends they were negligent in "filming and production of the movie so as to cause the wall to fall."

Rhys-Davies, 59, claims in the suit he suffered "severe and permanent" injuries. He is seeking unspecified damages.

Rhys-Davies appears in all three The Lord of the Rings films and was in 1989's "Indiana Jones and the Last Crusade" and numerous other films.