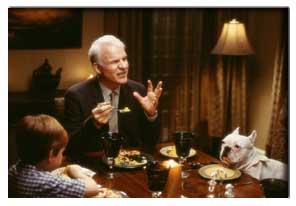 Steve Martin has been offered the lead role in the new Pink Panther movie.

He has been offered the part of Inspector Clouseau in the Birth of the Pink Panther, scheduled to begin shooting next year.

The inept sleuth is assigned to solve the murder of the nation's football team coach while investigating the disappearance of the legendary Pink Panther diamond.

The script for the comic remake has been written by Len Blum for MGM, according to Variety.com.