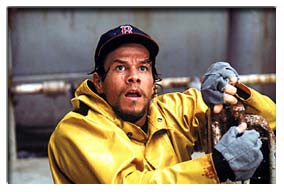 Mark Wahlberg say he would think twice before taking a role like Boogie Nights after becoming a dad.

The star, who heads the cast of a remake of The Italian Job, became a father to Ella Rae over a week ago.

And he says his new responsibilities mean he may not take parts which might come back and haunt his children.

In Boogie Nights he played Dirk Diggler in which he undid his trousers to bare a prosthetic penis.

Wahlberg, in London for the UK premiere of The Italian Job, said: "There will definitely be no more Boogie Nights or anything like that.

"In high school other kids can be really mean - you can imagine what Pamela Anderson's kids have to take into consideration."

Wahlberg was present when his girlfriend Rhea Durham gave birth.

"It was the most amazing thing I've ever seen. It was one of those things that everyone said it would be - and then some."

Like most of the cast of the new Italian Job, he had never seen the original.

But he was so intrigued, he watched it within moments of reading the new version.

Wahlberg said: "I loved it and the first thing I did was send it to my dad - I thought we had seen every great heist movie. It was great to turn him on to that."

The new movie bears little relation to the 60s classic - starring Michael Caine, although it does retain the spectacular car chase.

The US actor said the film was more of a homage to the original rather than a remake.