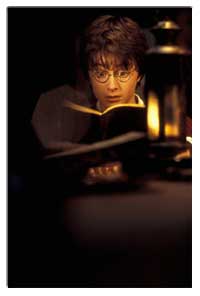 Warner Bros, makers of the Harry Potter films, has decided to keep Goblet of Fire as one film.

Many people reckoned the hefty 636-page book would be split into two films, so Potter fans wouldn't be disappointed by losing their favourite scenes.

But sources say Steve Kloves, who adapted the first three books, has been asked to make a single two-and-a-half-hour film.

Warner Bros has also said it would like to keep the present cast.

But Daniel Radcliffe, Emma Watson and Rupert Grint are getting on a bit, making some people question if they will return for the fourth film.

The film-makers have said they will make a definite announcement about who will play Harry, Hermione and Ron soon.

Casting for Goblet of Fire does not begin until January 2004, and Prisoner of Azkaban will be released in June of that year.