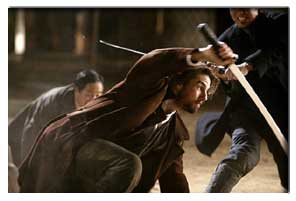 Tom Cruise says he trained for eight months before filming his role in Last Samurai, The (2003).

He was in Tokyo to promote the movie in which he plays an American hired in the late 1800s to help Japanese warriors in western war tactics.

Cruise said his role was a difficult departure from the characters he has played in the past.

"I trained for eight months prior to shooting the film. I put on 20 pounds for the character but also for the muscle to carry the swords and wear the armour."

In the movie, Cruise plays a retired US army captain hired by Emperor Meiji to create a modern Japanese army. Up to 500 Japanese extras were flown to New Zealand, where the film was shot, for major battle scenes.

Co-star Ken Watanabe, who has played many samurai roles, said Cruise was a quick learner: "I feel like we have been through a battle together," he said.

Cruise said of the film's theme of bushido, the moral code of the samurai class: "This is very personal to me. I strongly believe in the values of honour, loyalty and compassion."

The film, directed by Edward Zwick, is due out in December.