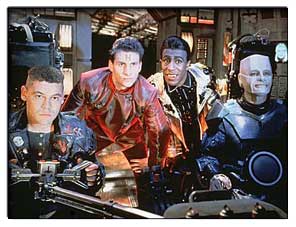 A film version of Red Dwarf is to begin shooting with the regular cast in Australia.

Craig Charles says he is due to start work on the £12m film in October.

The schedule is expected to last for four months.

Charles, 39, told TV Plus: "It's been five years in the melting pot and it looks like it's finally going to happen. The script is excellent and everyone is looking forward to making it.

"The makers, Winchester Films, have already provisionally sold it to Australia, Britain and Japan and it should do well in America as it's shown on US TV. Money is still a stumbling block but I think BBC Worldwide is putting cash into it. The budget of £12m is massive for a non-Hollywood movie."