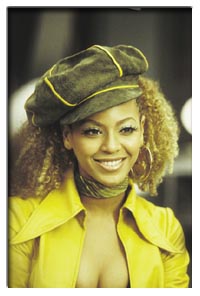 Beyonce Knowles is set to star in the forthcoming movie The Fighting Temptations as a nightclub singer who turns to gospel.

Knowles will also be recording a song for the soundtrack that will feature Missy Elliott, MC Lyte and Free, says the nme website.

Starring alongside Cuba Gooding Jr., Knowles plays Lilly, a "down-to earth country girl". She added, "I didn't want to do anything glamorous. I wanted people to see me in a different light."

Knowles said: "It talks about everyday situations women go through. It's about being attracted to this guy but having to fight the temptation. The change from the hip-hop part with ladies rapping to the chorus is incredible. It's very loose, old school."