American Pie 3 'the grossest yet' 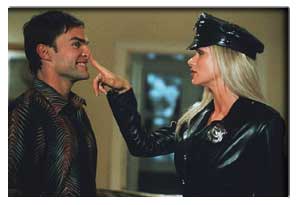 American Pie star Seann William Scott says the third installment of the comedy is the "grossest" yet.

It features his character enjoying some "good, camp fun" in a scene where he pretends to be gay.

Seann says the movie also features lots of sex, a wheelchair-bound granny and a randy dog.

He told Radio 1: "Stifler screws things up quite a bit in this movie, and one of the things that happens is, he's supposed to hold on to the wedding ring, and it gets eaten by a dog, and comes out in a really horrible form.

"And once again, Stifler gets himself into a pretty smelly predicament."

The film only features half of the original cast, including Jason Biggs as the sexually inept Jim, and Alyson Hannigan as Michelle.

American Wedding opens in US cinemas later this week, ahead of its UK release on August 15.