Final Lord of the Rings will be 'biggest war film ever' 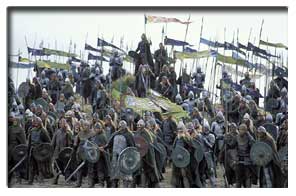 Lord Of The Rings star Elijah Wood says the final film in the trilogy could be the biggest war film of all time.

The Return Of The King, which will be released in December, will tie up the stories of Frodo, Aragorn and Gandalf.

Wood, who plays Frodo Baggins in the films, says director Peter Jackson has told the cast it will be

"the most massive war movie ever shown on film."

"That's what Peter is saying," he told MTV.com. "I mean, it's a massive boast, but I'd say it's pretty close to that."

Wood's fellow Hobbit Dominic Monaghan, who plays Merry, has warned fans to make sure they take along a

box of tissues to the cinema: "Return of the King is truly sad," he said.

"It's about what the fellowship has to sacrifice to essentially save Middle Earth. So you see these people facing the consequences of their actions," he said.