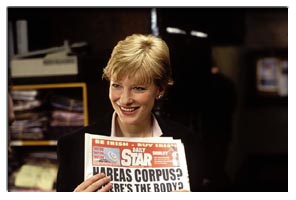 A film about an Irish journalist who was murdered after investigating Dublin's criminal underworld has become a huge hit in Ireland.
Veronica Guerin, which stars Cate Blanchett in the title role, took more than £270,000 from 53 cinemas in Ireland between Friday and Sunday.

That put it in the top five of the UK and Ireland's box office chart - despite the fact it is not released in the UK until August.

It took an average of more than £5,000 per cinema - more than Charlie's Angels or Bruce Almighty, which remained in the chart's top two spots.

Ms Guerin, who wrote for Ireland's Sunday Independent, was murdered in 1996 after writing a series of exposes on Dublin's drugs dealers and crime bosses.

She was shot by a gunman on a motorcycle as she sat in her car at traffic lights.

Blanchett recently said she was "fascinated" by the story but also said she felt "enormous responsibility" towards the reporter's family.

It is directed by Phone Booth's Joel Schumacher and produced by Jerry Bruckheimer, usually known for all-action Hollywood blockbusters.

Bono, Colin Farrell and Ronan Keating were among those at its première in Dublin.

The film is not released in Northern Ireland or Great Britain until 1 August.

Charlie's Angels: Full Throttle was the top film across the UK and Ireland for a second week, earning almost £1.6m between Friday and Monday.

But Michael Douglas' latest film, comedy The In-Laws, could only manage a new entry at number eight.