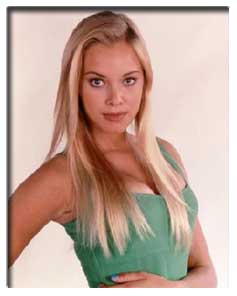 A few months ago even the Terminator had trouble remembering the name of his stunning new adversary.
Now the woman behind sexy android assassin T-X has made sure that Arnold Schwarzenegger, and the whole world, will remember the name Kristanna Loken.

Her entrance in Terminator 3: Rise of the Machines is guaranteed to raise both temperatures and eyebrows when she stands stark naked in the middle of Beverly Hills' Rodeo Drive.

"There was no way out of that scene," she laughs. "Everyone knows the Terminators are transported through time and arrive naked so it was justified.

"The only problem was that there were so many tourists. The challenge was to shoot the scene without providing too much of a peep show. But I didn't mind. As an actor, you try to be as daring as possible."

Her perfect features are ideal for the clinical beauty of the T-X android who is as cold and lethal as she is sexy and seductive.

"We tested over a hundred girls for that role and she just jumped out of the screen," says Andy Vajna who has co-produced all three Terminator movies. "She kicked Arnold's ass - and he loved it!" Loken, 23, admits her physical attributes helped land this lead role. "I'm tall with quite a deep voice," says the former model who was picked up by Elite Modelling Agency at the age of 15.

"I heard this part was coming around a little before Christmas 2001 and I thought, `Hmm, that's something that I think I can really do'."

She was made to work hard for the part though. She had to endure six weeks of physical training, including learning a martial art form called Krav Maga. "It's this Israeli form of really perfected street fighting that they teach the military over there," Loken explains.

"I was really fine-tuned toward the end when I had to do the nude stuff," she says. "In the back of my mind I kept thinking, `I'm fighting Arnold and I've got to be naked in front of the world'. So that was enough incentive."

The gruelling shoot saw Schwarzenegger play mentor to his young protégé who admits to being occasionally dazzled by the $340 million production and its leading man.

"At first it was a bit out of body in the sense that I am supposed to be overpowering him and I'm like, `Yeah, but it's Arnold!' "But then after a while, you start to believe it. He was extremely accommodating and so skilled in what he does. It was a really wonderful experience."

That learning curve has been steep since she first emerged as a child actress on US TV cop show Law & Order in 1990.

Further TV parts in The New Adventures of Superman and Mortal Kombat followed until she landed her first movie role in the futuristic cop thriller Gangland alongside rappers Ice-T and Coolio three years ago.

There's little chance of Kristanna escaping the hysteria she's created for herself by becoming part of a $1 billion franchise.

"When I got the job my manager said, `Kristanna, just enjoy this last year of anonymity, because afterward you're not going to be able to pump your own gas.

"I don't know what to expect. I'm just trying to hold it together and take it as it comes but it's wild and a little overwhelming seeing my face everywhere."