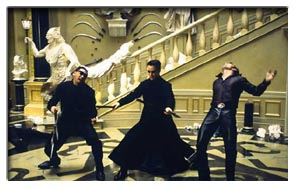 Egyptian censors have banned The Matrix Reloaded on religious grounds because it is too violent.

The 15-member censorship committee is made up of film critics, professors, writers and psychologists.

It watched the Warner Bros movie and held a discussion before voting to ban it.

Madkour Thabit, the head of the country's censorship body, said: "There is no specific scene to which the committee objected but it is about the movie as a whole."

The committee said: "Despite the high technology and fabulous effects of the movie, it explicitly handles the issue of existence and creation, which are related to the three divine religions, which we all respect and believe in".

The movie "tackles the issue of the creator and his creations, searching the origin of creation and the issue of compulsion and free will", the committee said.

It added that "such religious issues, raised in previous times, caused crises".

The statement says violent scenes in the movie also played a role in the decision to ban it.

"Screening the movie may cause troubles and harm social peace," the statement said.

The first Matrix film was shown in Egypt but was criticised by some Islamic newspapers after they claimed it espoused Zionism.