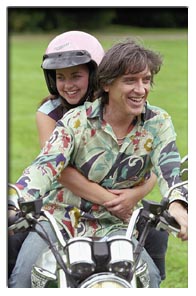 Charlotte Church has dressed down to attend the premiere of her movie debut.

The 17-year-old singer chose jeans, a black low cut key-hole top and peep-toe high-heels for the screening of I'll Be There at Cardiff Bay's UCI cinema.

But she still managed to sparkle with a cascading gold necklace, earrings and bracelet as she signed autographs for more than 100 fans.

With her boyfriend, Steven Johnson by her side, Church posed for photographs with writer and director Craig Ferguson, who plays a washed-up 80s pop star whose life is changed when he discovers he has a teenage daughter Olivia (Church).

She is inspired to follow in her new found father's footsteps with a musical career of her own against the wishes of her mother, played by Jemma Redgrave.

Church explained why her parents were not at the premiere, quashing speculation that they disapproved of her boyfriend, saying: "My family were never planning to be here, they are all coming to the London premiere because they wanted to come to the big glitzy one and wear nice frocks.

"There was never a showdown and there never would have been - my mum's not like that and Steven is not like that, he's really shy."

She said making the film - which opens on Friday - had been a brilliant experience, and she wanted to make more if the project was right. She said: "I've done some meetings and stuff but nothing is planned yet."

But Church admitted she had had doubts about her acting abilities, adding: "I was really nervous, I was like 'Oh my God', I'm crap, I can't do this, I can't act', but it got better and better."

And the star said she had no fears about a backlash such as that suffered by Britney Spears after her film Crossroads. "It's going to be slagged off but I'll just take it on the chin," she said.