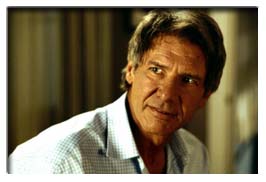 Harrison Ford was lost for words as he received a star on the Hollywood Walk of Fame.

The actor was accompanied by his mother, his girlfriend Calista Flockhart, and director Steven Spielberg.

But he stammered as he was asked to make a speech outside the Kodak Theatre in Los Angeles.

Ford and Spielberg will soon be teaming up again for the fourth instalment of the Indiana Jones series.

Ford, 60, was working as a carpenter when he got a small but extremely visible role in American Graffiti, the first major success for Spielberg's friend George Lucas.

Lucas went on to chose him as the renegade starship captain Han Solo in Star Wars, which launched his career.