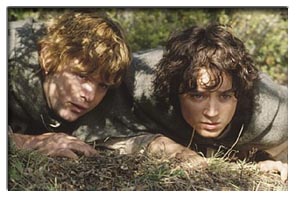 The Lord of the Rings: The Two Towers took top honours at the MTV Movie Awards in Los Angeles, in a show dominated by superheroes and special effects.
The second part of Tolkien's fantasy trilogy won four awards at the light-hearted ceremony, including best movie, best action sequence, and best on-screen team for Elijah Wood, Sean Astin and slimy virtual character Gollum.

The computer generated baddie also won the new prize for best virtual performance, which was accepted by actor Andy Serkis - who voiced the character and performed the movements for its animation.

But as Serkis was thanking film-maker Peter Jackson and his team, an emaciated Gollum appeared to snatch his prize back.

"You're a liar and a thief - it's mine!," he hissed, before delivering a expletive-filled tirade against the cast, crew and MTV.

Competition for the prize came from Yoda, the little green Jedi from Star Wars: Episode II - Attack of the Clones; the jabbering marsupial in Kangaroo Jack; Dobby the elf in Harry Potter and The Chamber of Secrets; and Scooby-Doo.

Yoda had his day at the Shine Auditorium though, winning a prize for his fight scene with Christopher Lee.

The character appeared on a giant screen to accept his award, speaking in his trademark circuituous manner.

"Hmmm grateful am I to this award receive. To win, I did not expect," he said.

"Promise myself cry I would not."

He thanked supporters both real and virtual, before becoming angry as music cut short his speech.

The winners in the MTV awards are picked by the network's viewers, and the whole ceremony is presented as an alternative to the usual Hollywood award shows.

Rapper Eminem took best male and breakthrough male for 8 Mile (2002), and he took a pop at Mariah Carey's romantic flop Glitter in his taped acceptance speech.

"I can't believe I beat Mariah for Glitter," he said.

Kristen Dunst won best actress for Spider-Man, and she also shared best kiss for her clinch with Tobey Maguire in the same film.

The show was compered by Justin Timberlake and American Pie actor Seann William Scott, who performed a spoof of The Matrix Reloaded.

In it, Timberlake used his 'Nsync dance moves to combat a growling computerised "agent" played by Scott.