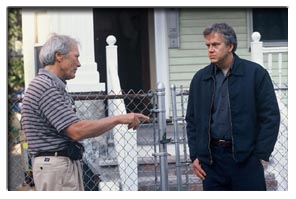 Clint Eastwood, Peter Greenaway and Gus Van Sant will all be competing for the top prize at this year's Cannes Film Festival.

Eastwood's Mystic River (2003), which stars Sean Penn, Tim Robbins and Kevin Bacon, is one of the more high-profile films vying for the prestigious Palme d'Or.

The festival opens on May 14 with the remake of Fanfan la tulipe (2003), starring Penélope Cruz.

Peter Greenaway, who has been nominated for the Palme d'Or three times, will present The Moab Story/The Tulse Luper Suitcase - Part 1.

And the director of Drugstore Cowboy (1989) and Good Will Hunting (1997), Gus Van Sant, will be represented by the movie Elephant.

Matrix Reloaded, The (2003), the sequel to the highly successful sci-fi movie, will receive its world premiere out of competition on May 15.

Wim Wenders, who was Oscar-nominated in 1999 for the documentary Buena Vista Social Club, will show The Soul of a Man. And Charles Chaplin's last silent movie, the 1936 comedy Modern Times, will close the festival on May 25.