Hugh's afraid of a wolf 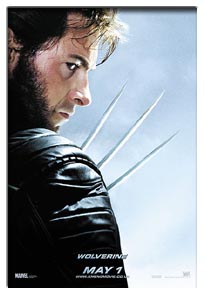 Hugh Jackman believes the X-Men movies could end up having a cinematic life with a longevity like that of James Bond.
But don't expect the Australian actor to be donning the lamb chop sideburns and steel claws of mutant superhero Wolverine into his old age.

While Jackman says he may do another sequel, depending on the success of X-Men 2, it will likely be the last time he battles the bad guys in the series based on the Marvel comic.

Instead, Jackman reckons the filmmakers have a huge choice of characters to take the franchise in any direction.

"They don't really have to rely on the existing format because there are so many characters in the pantheon of the comic book series," he says.

"The younger characters, which Wolverine mentors, could take up the mantle and do just as good a job. It is limitless and the characters could grow up with the fans."

The fans have already had their influence on the franchise with many complaining the original movie, released in 2000, didn't have enough of the characters or action from the comic book.

The result is a faster-paced movie that is considerably more violent.

While it is one of the better action movies of recent years, it does tend to lose the audience in parts as the various sub-plots work to confuse the main thrust of the tale.

The bad guys are Stryker (Brian Cox), Magneto (Ian McKellen) and Mystique (Rebecca Romijn-Stamos), who are members of The Brotherhood (of Evil Mutants).

The X-Men are led by Professor Xavier, who tracks future candidates for his School for Gifted Youngsters and teaches the individuals on how to use their unique powers for a positive cause.

This time around, Stryker launches an attack on the school and attempts to get his hands on a hi-tech system that identifies all of the Mutants in the world.

The intention, of course, is to find the Mutants and kill them.