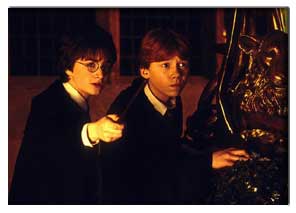 A Dutch judge said the Tanja Grotter story has too many similarities to the boy wizard of Hogwarts.

Sitting in Amsterdam, he ordered Dutch publisher Byblos to withhold 7,000 translated copies of the first book by Russian Dmitry Yemets. He rejected an argument that it was a parody of Harry Potter, not plagiarism.

The court ruled that if released in Holland, the Russian tale would violate registered copyrights and trademarks. It has already sold more than one million copies in Russia.

Even for a casual reader, the similarities between Harry Potter and the Sorcerer's Stone and Tanja Grotter and the Magic Bass are unmistakable.

Harry rides a broomstick, while Tanja flies a musical instrument. Both have strange facial markings, are aged 10, and become stars in a dangerous ball sport played in mid-air. Even the name of the supernatural villain in the Grotter books, Chuma-del-Tort, seems close to the original Voldemort.

Byblos acknowledged the Harry Potter story line had been used as a framework, but said the Russian book, supposed to go on sale next Tuesday, targeted an older audience that understands subtle humour.

Rowling's Dutch lawyer Eric Keyzer said: "Harry Potter has won and Tanja Potter cannot be published in the Netherlands. We are especially happy that the court confirmed that this is plagiarism, that it's not a parody and that it's trademark infringement."

The decision, based on European law, may lead publishers in other countries to think twice before taking on Potter. Byblos has four weeks to file an appeal - which it has said it will do.

The ruling was also a victory for the US company Time Warner Entertainment, also a party in the suit, which filmed the books and sells Harry Potter dolls, videos and countless other memorabilia.