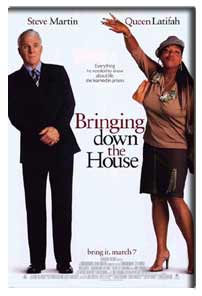 A New York lawyer who says she had the original idea for box office hit Bringing Down the House (2003) has filed a $15m (£9.6m) lawsuit against Queen Latifah and the film's other producers.
Marie Flaherty says the family comedy copies Amoral Dilemma, a screenplay she wrote several years ago about a lawyer who meets a prisoner on the internet.

Bringing Down the House, starring Chicago star Latifah and Steve Martin, tells of a prisoner who meets a lawyer in a chat room and makes her way into his life in the hope that he can exonerate her.

It is the number two film at the US box office, having taken $12.5m (£8m) at the weekend and topped the charts for the previous three week.

In a lawsuit filed on Friday in Manhattan federal court, Ms Flaherty set out her case alleging copyright infringement.

She says that Boston lawyer George N Tobia Jr agreed to represent her in 1999 as she tried to sell Amoral Dilemma.

A few months later, she says, Mr Tobia called her to say that he and a family friend - screenwriter Jason Filardi - had sold a script called Jailbabe.com which eventually became Bringing Down the House (2003).

Ms Flaherty says she confronted Mr Tobia about the similarities, and he told her repeatedly that Mr Filardi's script was a comedy, while hers was a drama.

Named as defendants in the lawsuit are Mr Tobia, Mr Filardi and the movie's producers, including Latifah - real name Dana Owens.

Hyde Park Entertainment, which produced the film, and Walt Disney Co, which distributed it, are listed as co-defendants.

Ms Flaherty intends to represent herself in court.