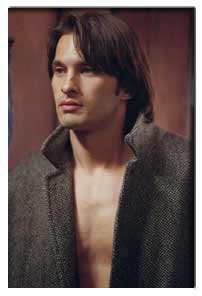 The pair have only been dating for a month but Olivier’s cousin, Stephane Martinez, says the French heart-throb has totally fallen for the pint-sized pop princess and rarely stops talking about her.

He adds that his famous relative thinks Kylie is the one. Breaking the family’s silence about the couple, Stephane  who lives in Paris  says:

Olivier has totally fallen for Kylie. He’s not the kind of guy to have flings, so it must be serious. He doesn’t stop talking about her and when he wasn’t talking to me, he was on the phone for hours to Kylie.

He couldn’t wait to see her again. After a few days break he left to go to LA and meet up with her. He was really excited.

Talking about the possibility of marriage, Stephane adds: I think Olly hopes this one will go all the way.

The couple were in Hollywood for the Oscars but snubbed the ceremony and were holed up in their suite at the Chateau Marmont hotel.