Matrix short to première in US 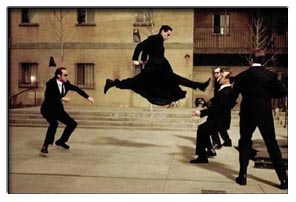 Fans awaiting the release of two sequels of The Matrix can get a taster with a short film which debuts this weekend in the US ahead of the movie Dreamcatcher.
The Final Flight of Osiris, which cost $5m (£3.5m) to make, is one of nine short films written or developed by The Matrix creators Andy and Larry Wachowski.

It is set after the first film and sets up the story for The Matrix Reloaded, which opens on 15 May.

A second sequel, The Matrix Revolutions, will be released in November.

The short film took 13 months to make and it was originally only intended to be shown through the internet and DVDs.

Franchise producer Joel Silverman said he also considered re-releasing the original The Matrix to give The Flight of Osiris a platform to première.

But Dreamcatcher (2003) director Lawrence Kasdan offered to have the short film attached to his horror movie, which opens in the US on Friday.

The short is directed by Andy Jones, one of the production on CGI-heavy movie Final Fantasy: The Spirits Within (2001), who described the script as "fun, sexy and intense".

The other shorts are anime productions - a style of animation developed in Japan featuring colourful, futuristic settings.

Four of the films will debut on the internet, one at a time, until Matrix Reloaded, The (2003) is released.

The remaining four will feature on a DVD called The Animatrix, released on 3 June and featuring all nine short films.

The Enter the Matrix videogame, written by the Wachowski brothers, is also hitting the shops on 15 May.

It cost a reported $20m (£12.7m) to produce and features an hour of film footage shot exclusively for the game during filming of the two movies.