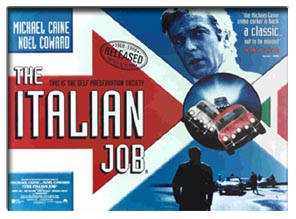 An immortal comment from Michael Caine in The Italian Job has been named the greatest one-liner in cinema.

Movie fans say the Caine's classic pay-off: "You were only supposed to blow the bloody doors off" is the top screen line.

Runner-up in the Orange poll was Rhett Butler's (Clark Gable) put-down from Gone With The Wind: "Frankly my dear, I don't give a damn."

Cult hit Withnail And I came in third place for the line "we want the finest wines available to humanity, we want them here and we want them now", delivered by Richard E Grant.

Kenneth Williams's speech "infamy, infamy, they've all got it in for me" as Julius Caesar in Carry On Cleo is at number nine.

The survey was carried out to mark a series of talks at the British Library called the Orange Word Screenwriters season featuring movie writers such as Chris Columbus, Hanif Kureishi, Mike Leigh and Withnail creator Bruce Robinson.

Listeners to radio station BBC London also took part in the poll, which also identified the duffest lines on screen.

Andie MacDowell's cringeworthy "Is it raining? I hadn't noticed" from Four Weddings And A Funeral (1994) was voted the worst line.