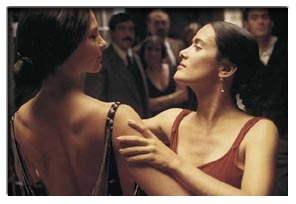 Salma Hayek has said the news of the Oscar nominations won by her film Frida (2002) made her feel relieved not elated.
Frida, about the life of Mexican surrealist painter Frida Kahlo, was selected on Tuesday to compete for six awards, including best actress for Hayek, who also produced.

Mexican-born Hayek told a press conference on Wednesday how she had to struggle to get the project off the ground, and to overcome the scepticism of her native people.

"The night before I was very scared," Hayek said.

"There was so much bother and so much anticipation in Mexico about the film that I was really nervous.

"So when the first nomination came, my first feeling was one of relief."


Hayek, a big fan of Kahlo's work and fiery spirit, was given the film script by a small independent film company after it dropped plans to make the movie.

The actress was then known for her roles in Desperado and From Dusk Till Dawn but had always wanted to play Kahlo.

She had trouble finding funding and a studio willing to take on what looked like an obscure, and unprofitable project.

But the mood changed and rival projects even saw temporary interest from Madonna and Jennifer Lopez.

Frida will receive its UK première on Thursday, after a successful run in the US and Latin countries.

Hayek said her conviction in her project kept her fighting to see it realised.

"When I truly believe in something, I am going to put up my best fight," she said.

"But that (the fight) is OK. If people had come to me and said, 'Here is the best script, do you want to do it?' I wouldn't have learnt, or grown."

Geoffrey Rush also features as Leon Trotsky, with whom Kahlo had an affair when he was hiding in her house after fleeing Russia.

Hayek invested a lot of herself in Frida but now the work was over, she said, it was time to move on.

"When a dream is done, you put it aside and have the courage to dream a new one I will just enjoy whatever that is to its fullest - that is one lesson I have learnt from Kahlo."

Hayek's most recent project was her directorial debut on the film The Maldonado Miracle, starring Peter Fonda.

The Academy Awards will be handed out in Los Angeles on 23 March.