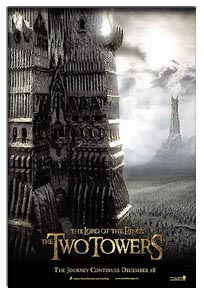 Pirate DVDs of the new Lord of the Rings film have been copied from a disc sent to Oscar judges.

More than 10,000 illegal copies of The Two Towers have been seized in Britain according to the Federation Against Copyright Theft .

Many were copied from DVDs produced for members of the Motion Picture Association of America in the hope of winning Oscar votes.

Fact said these direct digital copies were a far higher quality than the traditional pirate method of using a video camera during a screening.

Their only blemish is a "for your consideration" Academy Award message that pops up every 15 minutes.

Lord of the Rings: The Two Towers is not expected to be released on DVD in the UK for at least a year.

Fact director general David Lowe told the Hollywood Reporter: "I think it is extremely disappointing that people involved in the industry have let copies of Academy screeners go astray."

Some distributors are now wary of supplying copies to members of the British Academy of Film and Television Arts ahead of the February 23 awards, because of fears that there could be further piracy.