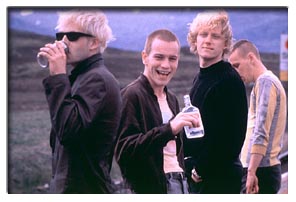 The sequel to Trainspotting could face problems - because the cast look too healthy.

Ewan McGregor, Robert Carlyle and Jonny Lee Miller are all set to return for the film, in which they play heroin addicts.

But, commenting on the project at a film festival in Los Angeles, he said: "They look as if they've been using face cream. They all look great."