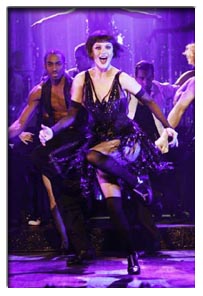 Catherine Zeta Jones has revealed how playing murderess and nightclub singer Velma Kelly in Chicago was her destiny.

The Welsh beauty also admitted losing her temper with "these big hairy guys" snoring at the back of the set during filming.

She told The People magazine she wanted to be on stage long before she ever considered movies.

"It was a challenge, but I was born to play Velma."

"She's so bitter and twisted, so tongue-in-cheek - and so sexy. Here was my chance to cavort in sexy stockings and suspenders, bra and knickers."

But it was not all plain sailing for the former Darling Buds of May star who was forced to take a day off after only the first day of filming because of an injury to her Achilles tendon.

Zeta Jones, married to Michael Douglas, had intended to impress director Rob Marshall but "went completely over the top". The next day she could not even walk down the stairs.