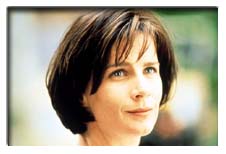 It's not often that Hollywood comes to Melbourne, but it certainly did when Rachel Griffiths married Andrew Taylor on New Year's Eve.

The couple wed in a candlelit dusk service at the Star of the Sea Chapel in Gardenvale, where Griffiths went to school, about 8.30pm.

The theme of the night was "bohemian glam", and guests were encouraged to dress up for the occasion.

"We wanted to embrace the sensual," the couple said of their wedding in a press release.

Guests were picked up in a double-decker party bus from around town and the 140 close family and friends did not know where they were going until they arrived at the chapel for the full Catholic mass.

Griffiths' mother Anna walked her down the aisle to a bridal march by London-based Australian composer Barrington Pheloung.

The St Kevin's Boys Choir sang at the service.

She did not have bridesmaids because she believes "no women in their 30s should be seen appearing in matching dresses".

Following the ceremony, 220 guests partied at the Palais Theatre foyer, which was transformed under the banner A Midsummer Night's Dream.

Far from being traditional, the bride and groom wore unique outfits from international fashion designers.

The bride gave a speech at the Palais, telling how the minute she met Taylor some 17 years ago she knew he was something special.

As midnight approached the cake was cut and guests partied until 4am.

Griffiths and her husband will spend a week in Australia before she returns to the US to continue filming Six Feet Under.

The couple released one picture to the media, with all proceeds going to the Sacred Heart Mission in St Kilda.

At Crown Casino, Nathan Buckley and bride Tania Minnici celebrated with a more traditional reception at the River Room.