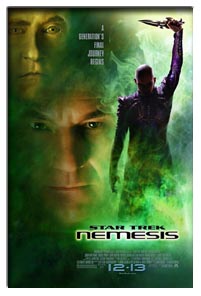 Rick Berman the producer of Star Trek: Nemesis (2002) has revealed that there will be another movie following Nemesis even though the latest one hasn't even been released.

He has been speaking of the expected success of Star Trek: Nemesis (2002) when it is released later this month, "I can tell you right now we'll be making another film. There's never been a Star Trek movie that wasn't profitable for Paramount. One of the things about Star Trek movies is there's no risk in making them because the studio knows if you spend this much money on producing the film, you're going to make that much money or you might even make that much money. But there's pretty much a window of the profitability of these films, unlike non-Star Trek films which could be total wrecks and not make a dime, or could take off and make $200 million, there's a risk involved. There's very little risk involved in Star Trek films."