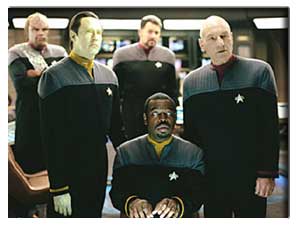 The executive producer of the Star Trek movies says the next film could contain characters from different series.

Rick Berman says there will definitely be a Star Trek 11 regardless of how well the new film, Star Trek: Nemesis (2002), does at the box office.

Berman says there's been no discussion about the next film on an official level.

However, he does believe that a mix of characters could be a good idea for the feature film franchise.

He told www.cinescape.com: "I don't know if putting Deep Space Nine's Captain Sisko on the screen is viable."

He added: "I think there are certain characters from other shows that would work. Colm Meaney is a remarkable actor. Jeri Ryan, I can't imagine people would not love to see her on the big screen. So there are possibilities of combining other actors.

"I'm not suggesting that we're going to do that. It's just a possibility. It's even a possibility that we would include characters from Enterprise even though they're 200 years earlier. Anything's possible with Star Trek."

Star Trek Nemesis is released in the UK on January 3.