Her Majesty Meets Her Secret Agent At Premiere 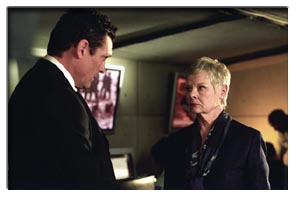 At a charity screening of the new James Bond film, Die Another Day (2002), Pierce Brosnan was greeted by the Queen and the Duke of Edinburgh.

The event held at the Royal Albert Hall in London was attended by a total of four Bonds, Roger Moore, Timothy Dalton, George Lazenby and the current one, Pierce Brosnan. The only Bond not present was Sean Connery.

Other stars were present at the event in aid of the Cinema and Television Benevolent Fund including Halle Berry, Madonna, Rosamund Pike, John Cleese and Dame Judi Dench. Fans had grandstand seats to watch the stars arriving along with big screens for close-ups.

When introduced to Brosnan the Queen said, "So you're the modern James Bond are you? I've met the other three downstairs."

Producers Michael G Wilson and Barbara Broccoli said, "James Bond is the epitome of all things British" and added that they were proud that their production had been chosen as this years royal film performance.

Brosnan has confirmed his desire to do one more film which would be his fifth. Die Another Day (2002) is released in the UK tomorrow and the US on Friday.