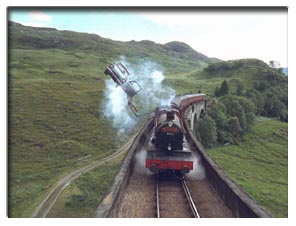 Whilst talking about the making of Harry Potter and the Chamber of Secrets (2002), Daniel Radcliffe has told how much he enjoyed filming the stunts.

"I loved filming the duelling scene, that was really brilliant. I love the confrontation between Snape and Gilderoy Lockhart who are completely different characters. Probably my most challenging scene was the Parseltongue scene, it was hard to get hold of at first but I kind of got used to it in the end. When I'm hanging out of the car, that was actually me! I was hanging 30 feet up in the air and it was really cool."

Harry Potter and the Chamber of Secrets (2002) has been widely praised by critics and is said to be 'darker' than the first film. It goes on general release in the UK and US today.