New Harry Potter Even Better Than The First 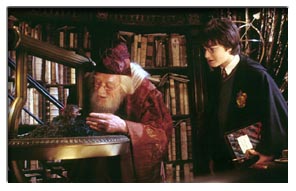 Lucky fans of Harry Potter who managed to see the latest film's premiere in London were said to be very impressed.

According to the fans Harry Potter and the Chamber of Secrets (2002) is even better than the first movie as it's funnier and more scary.

Thousands of fans filled Leicester Square in an attempt to see the stars. One was quoted as saying, "It's really, really good. It was a bit scary with the spiders. It's better than the first. There's new characters. I like Dobby the house elf."

The granddaughter of Richard Harris who recently died of Hodgkin's Disease said she enjoyed the film but was visibly upset after seeing her grandfather in the role of Professor Dumbledore.

The movie is released nation wide in the UK and US on the 15th November.