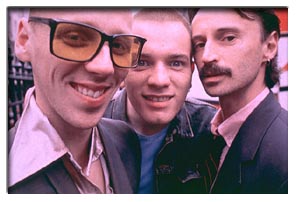 One problem was that Ewan McGregor, who plays the character of Renton, was on bad terms with director Danny Boyle after Leonardo DiCaprio was chosen for the lead role in Alex Garland's Beach, The (2000) - a role that many thought should have gone to the Scot.

Boyle believes that the original team of Ewan McGregor, Robert Carlyle, Ewen Bremner and Jonny Lee Miller will team up again is he can produce a script good enough to do the first one justice.

He said, "Everyone says it's about getting the actors back again, but I think more importantly, it's about whether we can do justice to the characters. They have become mythical figures since Trainspotting came out."

McGregor told Radio 1, "I thought it was best left as it was because it would be terrible shame if it didn't live up to expectations. Then I read the book and said 'Oh come on it's fantastic'. It's interesting to find out what the characters are up to."