Winona Ryder has gone on trial 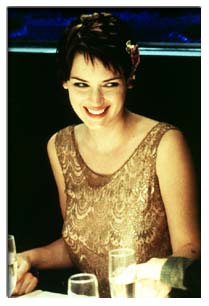 US actress Winona Ryder has gone on trial in California on charges of shoplifting $5,560 (£3,566) of designer items from an exclusive department store.

On the first day of the trial on Monday, a store security manager told the court that when he confronted Ms Ryder with the goods she had concealed, the actress claimed she had been preparing for a role.

Ms Ryder is accused of ripping security tags off 20 items and trying to leave the store without paying for them.

She could face up to three years in jail if convicted.

The incident happened in December at the exclusive Saks Fifth Avenue store in Beverly Hills.

Ms Ryder was stopped leaving the store with 20 unpaid items of designer clothes, handbags and accessories on her person and in her shopping bags.

The actress then told him "my director directed me to shoplift in preparation for a role I am preparing," he added.

The BBC's David Willis at the court says that since her arrest, no film about shoplifting has been made.

Prosecutor Ann Rundle told the Beverly Hills Superior Court that it was "a simple case of theft".

Ms Rundle said the star had gone to the store with scissors, a garment bag and tissue paper.

"She came prepared to buy with her cash and credit cards, but unlike other shoppers she also came with the intent to steal," she told the court.
Ms Rundle, a deputy district attorney for the Los Angeles District Attorney's Office, was making her opening statements in the trial.

Ms Rundle said a video showing how bags filled up as Ryder went into and out of changing rooms would be shown to jurors.

Ms Ryder's lawyer, Mark Geragos, said in his opening statement that several Saks employees, who will be witnesses in court, changed their stories after a video was found not to show the actress stealing.

The trial is expected to last for between five and seven days.

The jury contains several of Ms Ryder's Hollywood peers - including the former head of Sony Pictures, the studio that made three of her best-known films.

Judge Elden Fox has banned the jurors from shopping at the department store during the trial.

It is not yet known whether Ms Ryder will give evidence during the trial.