Will Smith to appear as himself in new movie 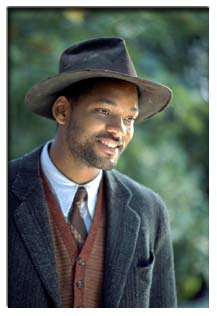 Will Smith is to make a cameo appearance in Kevin Smith's new film.

He is due to film his part in Jersey Girl later this month, which sees Ben Affleck and Jennifer Lopez starring as a married couple.

In the scene, which is set in 1996, Affleck's character Ollie is being shouted at by over 300 journalists waiting for Will Smith to show up.

But Ollie has ears only for his daughter, Gertie, whose cries are more compelling.
Finally getting fed-up with the media scrum, Ollie shouts at them: "Shut up with the Fresh Prince stuff!"

"He's a two-bit TV actor who won't be around any longer than it takes for the ink to dry on the pages of the worthless rags you jerks work for!"

Jersey Girl is due to be released next year.