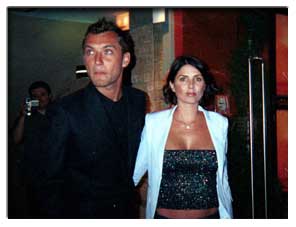 Jude Law and Sadie Frost's two year old daughter Iris has been rushed to hospital after swallowing the drug ecstasy according to news website Ananova.

Frost managed to prevent the child from taking the whole tablet which she is believed to have picked up off the floor of an exclusive club in London.

A police spokesman is quoted as saying, "The child had been attending a children's party on Saturday where she was believed to have picked up a tablet that had been left on the floor of the premises on Old Compton Street. The premises had been used as a bar and nightclub on the Friday.

It is believed that the child's mother discovered the two-year-old with an obstruction in her mouth. She managed to retrieve one half before it could be ingested.

An ambulance took the child to the hospital where she was kept in for observation overnight. She was released on Sunday morning. The tablet has been confirmed as ecstasy,"

The police added that there was no suggestion of neglect on the parents behalf.