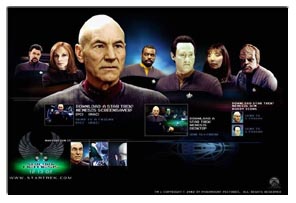 Patrick Stewart is warning Star Trek fans they should take a packet of tissues with them when they see the new film.

He has recently seen the movie which will be released in the UK early next year.

"It has some very intense relationships," said Stewart

"It's emotionally a very, very intense movie and the last half an hour is quite a roller coaster ride. I warn you, you should probably pick up one of those little pocket tissues to take with you.

"There is some sad but wonderful stuff at the end of the movie."