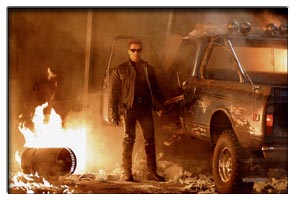 Filming on Terminator 3: Rise of the Machines (2002) has finished.

However the final scene that was filmed proved to be one of the most difficult.
It involved the arrival of the female Terminator on Rodeo Drive in Beverley Hills.

"As you know, they arrive naked," said director Jonathan Mostow

"Because there are so many tourists, the challenge was to shoot that scene with Kristanna Loken without attracting too many lookyloos."

Terminator 3 will be released next summer.