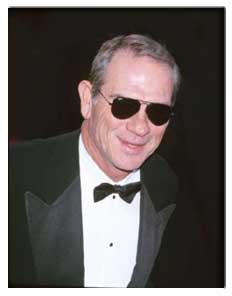 Tommy Lee Jones says filming Men In Black 2 (2002) was some of the happiest days of his life.
And he says he'd have no hesitation in reprising his role of Agent Kay for a third film.

"I'm always happy to have a job. Especially happy to have this one because I really did like the first movie, and working for director Barry Sonnenfeld with Will Smith have been some of the happiest days of my young working life," he said.

"I haven't had a lot of comedy come my way as a performer. Comedy's difficult and I've had a chance to work with the best and learn a lot about it, and reap the benefits.

"As an actor to watch an audience of people howl together in a single mind as a result of work you've done together with friends is a privilege.

"The thing that surprises me is things that I thought would be of no significance, things I thought were off-handed, things that were just a passing whim in my head as we were performing this movie, turned out to be huge laughs.

"And the other thing that's surprising is the momentum, people start laughing early and it builds like an avalanche.

"I'd start working on Men In Black 3 tomorrow if they wanted one. I enjoy the company."