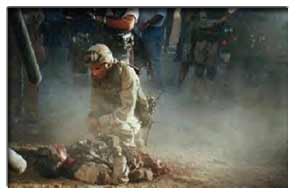 Hollywood war flick Black Hawk Down (2002) has ended the four- week reign of fantasy epic Lord Of The Rings: The Fellowship Of The Ring (2001) at the top of the American box office chart. The movie grossed $29 million (£20. 7 million) in its first three days of national release beginning on Friday (18th January 2002), after playing to packed houses in New York and Los Angeles the prior three weekends.