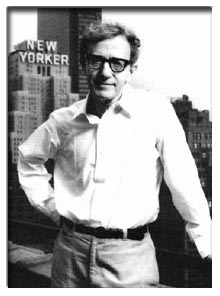 Actor WOODY ALLEN is terrified of losing his trademark glasses - because he'd look like a clone of his mother. The wry comic needs his specs as much to hide the startling resemblance, as to correct his poor eyesight.

He quips, "When I first put them on I hated them because I come from a generation where they were not considered attractive and because I was a baseball player in my youth, this was so humiliating. But now I find that if I take my glasses off I look like my mother. Much as I love her I don't want to look like her. I don't mind thinking like her. " (KW/WNWCGG/ES)