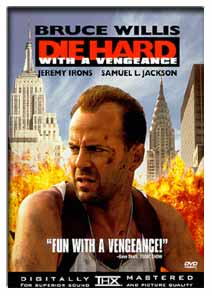 Movie fans have been choosing to rent terrorism-themed films since the terrorist attacks in New York and Washington DC (11SEP01). Canadian rental giants ROGERS VIDEO STORES said that borrowing of DVS (digital versatile disc) and videos of films such as AIR FORCE ONE (1997) and DIE HARD (1988) were in demand since the events.

Rogers spokesperson KATE REBAK says, "I did a search for movies that were related to the incident and that's how I found out that, for example, SIEGE, the (1998) was renting 12 times higher than it was before the attack. "

The 1998 thriller starred DENZEL WASHINGTON as the head of an anti-terrorism taskforce fighting terrorism attacks by muslim extremists on New York City. (ES/WNWCC)