Search Is On For Child Austin Powers Stars 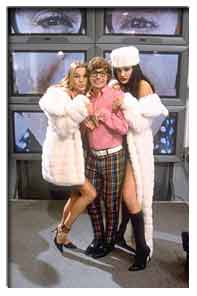 Casting directors are desperately scouring Hollywood, in an attempt to find a young AUSTIN POWERS for the next instalment in the movie series. MIKE MYERS' '60s defrosted spy guy will be revived in AUSTIN POWERS: GOLDMEMBER for release next year (01), and this time around, the filmic tale will take viewers back to Austin's growing years.

Studio bosses are now on the lookout for a six-year-old child and a 17-year-old youth to play younger versions of Austin Powers, DR EVIL and BASIL EXPOSITION. Production is set to begin on the new movie in November (01). (RGS/LA/ES)