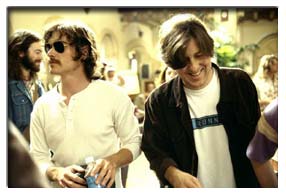 CAMERON CROWE has just put the finishing touches to a re-edited cut of his hit movie [ALMOST FAMOUS (2000). Fans can get their hands on the new version when it's released on DVD shortly before Christmas (01).

And the writer-director is certain his efforts will be appreciated, claiming he feels the "Bootleg Cut" may make for a more rounded and satisfying trip.

He explains, "With this Bootleg Cut, you feel like you're on tour with the band and you have a chance to get to know the characters in much greater depth. Don't get me wrong. I loved the theatrical version, but this is closer to the original script. " (KW/WNWCGG/KMW)