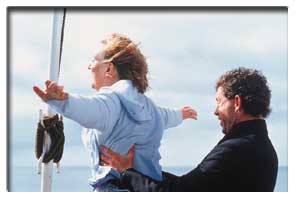 Actress KATHY BURKE has admitted that she has a crush on fellow comedian LEE EVANS. The cockney star says she loved snogging the rubber-faced funny man while filming new British film THE MARTINS. And she even reveals that Evans has one of the sexiest bottoms in showbusiness.

"He was very fond of showing his bum on set and kept on pulling his trousers down to show it," recalls Burke. "I didn't mind though because he's got a nice bottom. I'd definitely give him an 8/10 rating!"

The 37-year-old performer made her name as HARRY ENFIELD's sidekick in his hit television shows. In recent years Kathy has successfully made the transition to movies - winning acclaim for her role as an abused wife in GARY OLDMAN's debut directorial effort, NIL BY MOUTH (1997).

Her latest role in The Martins sees her and Evans cast as a downtrodden married couple. But that didn't stop Kathy from enjoying love scenes with her co- star. Burke said, "Lee is a very good snogger. He's lovely and very nice. Unfortunately we didn't get the chance to get too intimate as we were both acting. "