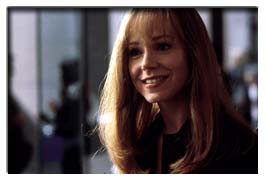 A.I.: Artificial Intelligence (2001) actress Frances O'Conner would love to be a big star like JULIANNE MOORE and FRANCES MCDORMAND. O'Connor admits she a huge fan of many of female acting peers who she'd love to be more like.

She says, "There are people like MEG RYAN, who is brilliant at what she does: she's her in everything. And then there's Frances McDormand or Julianne Moore, who can morph more from role to role.

I'm much more interested in being that kind of actor. I don't want to be ultra-famous. I worked that out in my year in Hollywood. As soon as you get known on that level, it's nothing but debilitating in terms of your acting.

I've seen it with people I know who are famous: they walk into a room and people are just reacting to them, ultra-excited about being in the room with them. " (RP/WNSOB)