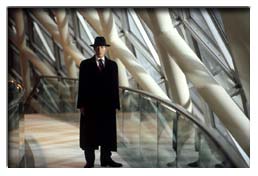 Lord of the Rings: The Fellowship of the Ring (2001) star SIR IAN MCKELLEN has assured fans he is safe and well despite being in Manhattan during the terrorist attacks. The British screen legend has posted a message of condolence to the families of those killed in Washington and New York on his website.

He says, "Our support and condolences go to the many families and friends affected by the destruction, and our appreciation to the thousands of extraordinary heroes. " (BRC/WNWCAN)