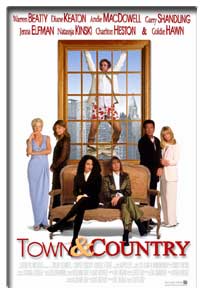 TOWN AND COUNTRY (2001) director PETER CHELSOM so hated working on the film he dreaded going into work. The film starring WARREN BEATTY turned into one of the biggest movie flops of recent years.

Chelsom has recently completed Serendipity (2001), due in cinemas 5 October (01), with JOHN CUSACK and says "It was like getting back on a horse," he says. "It's restored my faith in the film business. " (PDD/WNWCPS)