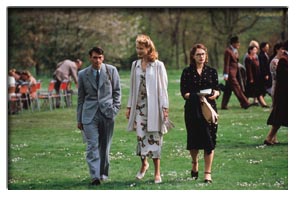 Actress KATE WINSLET is outraged by reports that her three-year marriage ended after she had an affair with her ENIGMA (2001) co-star. The TITANIC (1997) star, 25, announced that she was separating from assistant director husband JIM THREAPLETON last Monday (3SEP01) and her spokesman said,

"No other parties are involved in this amicable and respectful separation. " However on Sunday (9SEP01) British tabloid the NEWS OF THE WORLD reported that Kate was seeking comfort from DOUGRAY SCOTT, who recently split from his wife SARAH.

Yesterday (10SEP01) Kate revealed her anger at the reports, saying, "I don't know anything about Dougray and Sarah and their situation. " She slammed the reports as, "the most ridiculous thing I've heard".

Dougray backed up Kate's response, by issuing a statement saying, "I want to make it clear Kate Winslet and myself have never been in any kind of romantic relationship. " (ES/WNTSU/PDD)