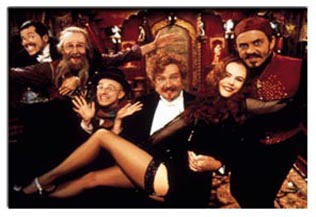 Movie-maker BAZ LUHRMANN believes that making MOULIN ROUGE (2001) was one of the hardest things he ever did in his life. Just as he was about to begin filming, he was told that his father had died. He shut the movie down for two weeks to mourn, and then actress NICOLE KIDMAN broke two ribs.

He says, "It was the most heart-of-darkness journey. It damn near wasted me. Everyday was like having someone beat you over the head with a baseball bat. I was just numb, trying to keep my eyes on the end of the tunnel.

What kept me going? Survival. It was like I was holding onto a rope, not walking it, just hanging on. There are only two options - you either let go or you hang on. " (RXT/SI/NFA)